As a teenager, I took a trip to some northern First Nations reserves, where my youth group planned to work with a local missionary and serve the community there.  During a training session, our instructor shared with us a proverb from the local tribes:

You have two eyes, two ears, and only

The point was obvious – we should approach the people as humble learners, earning the privilege to speak.  Jesus, in coming to earth as a baby, took His time to relate to humanity before beginning His ministry.  In fact, 90% of His life could be considered to be preparation!

As our Bible sharing & prayer group read through James 1:19-27, it seemed that James seemed to be describing us in a similar way, to make a slightly different point.  To James, the present concern is living a righteous life, or practising “pure religion” – and the way to accomplish this may be surprising.

19-21 – First, we are to be “quick to hear, slow to speak, slow to anger.”  Here, we’re reminded of how many ears and mouths we have.  Speaking quickly is associated with anger, which “does not produce the righteousness of God.”  What an understatement!  What a gentle, Canadian way of telling us what a bad idea it is to speak quickly, in anger.  Rather, we should put away evil, and “receive with meekness the implanted word, which is able to save your souls.”

This “word” is the Good News of Christ, Who lived to show us God’s love, Who died for our sins, and rose to reign over His followers, dwelling in them and working through them by the Holy Spirit.  In 1:18, James calls this the “word of truth,” which essentially makes believers reborn as a new creation, and a foreshadow of the great renewal to come.

While speaking in anger does not produce God’s righteousness, hearing the Word can save our souls, and make us a new creation – making us righteous in heart, and increasingly in deed.  But the word must not just be heard, but we must “receive with meekness the implanted word.”  The Word must be humbly received, with a silent mouth, open ears, and open hands.

22-25 – But, having heard the word, which saves us, we must also be “doers of the word.”  Using our two ears should lead us to activate our two feet.  For James, this involves using our two eyes.  We are called to “look into the perfect law, the law of liberty,” and not just hear and forget, but respond with action, and be blessed. 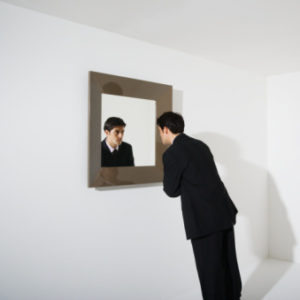 James offers an analogy – if you hear without acting, you’re like a person who looks in the mirror, and forgets his own appearance.  This analogy is appropriate, because the law functions like a mirror – its purpose is to show us our sin, and our need for Christ.  But, James doesn’t just say “law;” he says “perfect law, the law of liberty.”

What’s the difference?  While the Old Testament Law showed us our sin and pointed forward to our Savior, James is here referring to God’s “perfect” law – in Greek, that word is teleios – meaning finished and complete.  Jesus fulfilled the law, just as He said He would.  In His life, He interpreted the heart of the law – that it is all about loving God and one another – and then He fulfilled it perfectly.  In His death, He paid for our sins, freeing us from the law which condemns, to serve in His grace. And having  resurrected, He reigns over all, living in us by His Spirit – to fulfil the law through us.  By faith, we receive Christ’s righteousness, and become “instruments of righteousness.”

This “perfect law, the law of liberty:

(25) is the same as the “implanted word, which can save your souls” (21).  It is the good news of Jesus Christ which, when believed and received, brings us new birth (18) as a sort of firstfruits of the coming harvest – a redeemed creation, reconciled with God!  As John says in 1:12 of his Gospel account:

Yet to all who did receive him, to those who believed in his name, he gave the right to become children of God.

And what is life, as a child of God, like?  Here, we go full-circle – having heard God’s word of truth, having looked into God’s perfect law of liberty, we are called to put the words into action.  For James, belief necessarily leads to action.  If belief results in a new birth, a new beginning, and a new identity, then a new way of life should follow: pure religion.

26-27 – Religion has become a dirty word in our language and culture.  It is often associated with rigid, restrictive rules that suffocate our lives and leave us feeling inadequate or worse, condemned.  But, strictly speaking, religion simply refers to one’s order, system, or way of life that flows from their beliefs.  In other words, it is faith applied.

James begins by asserting that anyone who cannot bridle their tongue, but rather deceives their heart – their religion is worthless.  Being “quick to speak” is associated with anger, and not with God’s righteousness.  Rather, righteousness comes through hearing and receiving God’s word of truth.

Then James delivers one of the most memorable phrases in his entire letter: That, in God’s eyes, pure and undefiled religion looks like this:

Visiting orphans and widows – do you know any?  You may or may not.  But, it might be more likely than you think.  In Biblical times, when there was no old age pension or social welfare system in place, people would rely on family  when in need.  Those who lacked family would hope that there’d be help in their community – especially their religious community.  Today, do you know anyone who has lost a spouse or their family?  This can happen through death, divorce, estrangement, abuse, etc.
How many people do you know, who’ve been through the foster care system, or through divorce?  They may lack a lot of the relational support that others may take for granted.  Pure religion calls us to give to others what we have received from our generous Father.

Remaining unstained from the world.  Here’s where it begins to sound really difficult.  Usually people tend to succeed at either the former requirement, or the latter.  It’s hard to do both!  While offering great compassion and understanding to those in need, we run the risk of falling into temptation – to conform to the lifestyle of others, or enable their unhealthy behavior.  On the flip side, by focusing on remaining “unstained,” we run the risk of being cold-hearted, aloof, and neglectful toward those in need.  We are saved to be sent; we are blessed to bless.  Pure religion involves holding your tongue, and offering a helping hand – while “keeping them clean”.

What could this wholistic religion look like?  Look to Jesus for an example.  And continue with me in this Letter by the Apostle James!