This past Sunday, we just finished a 6-week journey through the Sermon on the Mount together.  Jesus says all kinds of startling, earth-shaking things in that famous address, re-defining how His followers would view the world, their lives, and Him.  But, He is not just giving some food for thought.  He closes His remarks with a challenge to respond: we must pick a side – are we in or out? 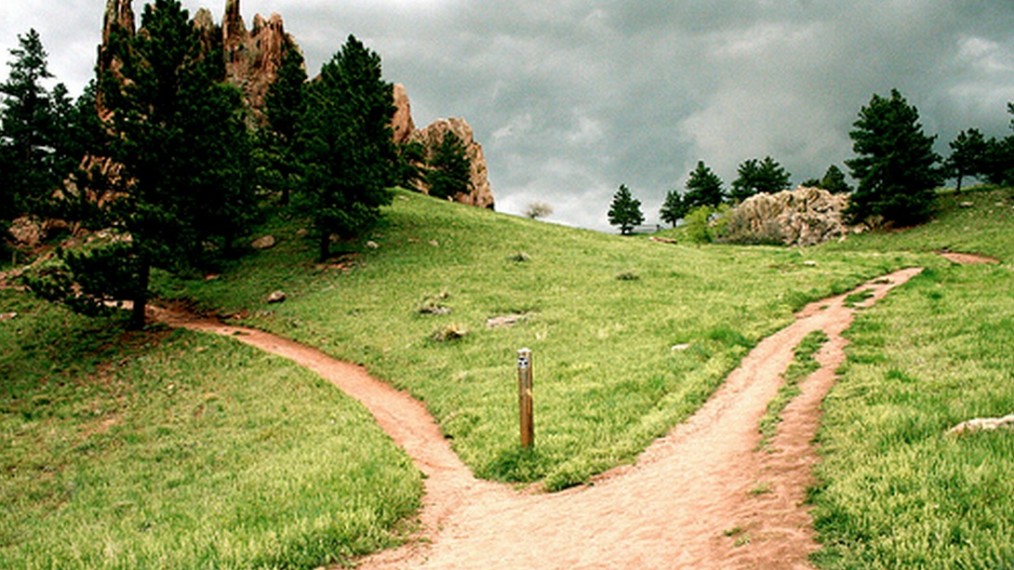 In Matthew 7:13-27, Jesus makes a similar point in four different ways: There are two kinds of people.  People can take broad path with the crowd, or the narrow path with Him.  They can listen to false prophets, or to fruitful, faithful teachers.  They can say they believe, or they can live it out.  They can build their house on the sand, or on the Rock of His words.

Jesus wasn’t just a nice teacher, or even a miraculous healer – to be accepted  as much or as little as we’d like.  He is the Son of God, Who calls us to believe in Him.  While this makes Him the greatest source of unity we could ever hope for,  this also makes Him extremely polarizing:
Based on their response to Jesus, people are divided into two categories.

Perhaps nowhere else have I seen this point more clearly than in the Gospel of Luke.  When our church traveled through the entire narrative of the Bible together in 2017, we spent a month in Luke.  That’s not a lot of time for such a “thorough account” of the life of Jesus, so I knew I needed to focus on a theme.  Having already reflected on the “Words of Jesus” from the Gospel of Mark, I approached the book of Luke from a different angle – examining Jesus’s impact on the people He encountered.  It was these “Encounters with Jesus” that really illustrated His polarizing effect on humanity.

Early in His ministry, Jesus clearly states that His purpose is to preach the good news of the kingdom (Luke 4:43) and call sinners to repentance (Luke 5:32).  The immediate response is remarkable: Matthew, a tax collector, the worst of sinners, responds to Jesus’s call, and holds a great banquet at his house to celebrate. The religious leaders notice that the banquet is full of sinners and, rather than celebrating along with Jesus, they complain.  Jesus is moving the goalposts, redefining righteousness as something based on repentance of sin and faith in Him, rather than outward appearance.  In response to this encounter with Jesus, sinners throw a party, and religious leaders complain.  Sinners are entering the kingdom ahead of religious leaders (Matthew 21:31).

Perhaps even more surprisingly, we see a similar contrast between the Jewish elders and a Roman centurion.  The centurion’s servant is gravely ill, and he sends some Jewish elders to ask Jesus to come and heal him.  A Roman ordering around Jews – so far, it sounds pretty normal for the occupier-subject relationship.  But then, the situation is turned upside-down.  The Jewish elders plead his case, claiming that the centurion “deserves” this favor because of his good deeds.  The word in Greek is axios, literally meaning “equal in weight,” and often translated as “worthy.”  But as Jesus approaches, the centurion sends friends to ask Jesus to not trouble Himself to come – but to simply give the word, and the servant will be healed.  The centurion actually considers himself undeserving of a visit by Jesus (hikanos = insufficient) and unworthy (axios) to approach Jesus, Himself.  In response, Jesus is amazed (thumazo).  Nowhere else in the gospels is this word used to describe Jesus, other than Mark 6:6, when He is amazed at the unbelief of His hometown, in response to His miracles.  Here, Jesus is amazed at this centurion’s faith – which was greater than any He had seen in Israel.  This foreigner, who considered himself unworthy, was actually more worthy than any of God’s chosen nation. 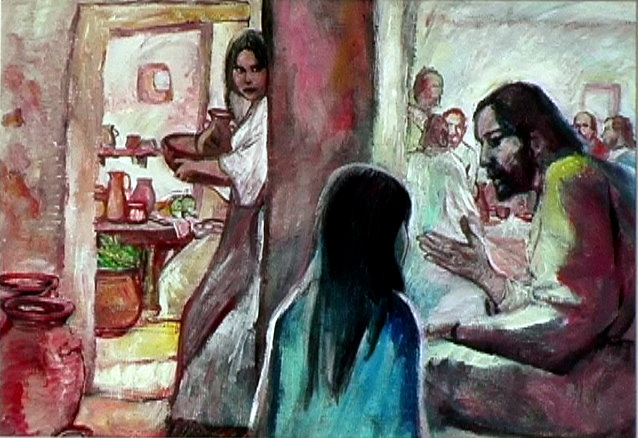 Moving on, Jesus later visits some friends – Mary & Martha, who were sisters of Lazarus.  Martha gets busy preparing a meal, while Mary sits at Jesus’s feet and listens to His teaching.  Martha gets upset, but Mary is affirmed.  This well-known story continues to irk well-meaning Christians, who find that they relate to Martha’s work ethic rather than Mary’s more passive demeanor.  But is this story merely about two different personalities?  No.  When Jesus says “Mary has chosen what is better,” He is talking about a conscious decision on their part.  He is not saying that one personality type is more holy than the other; He is saying that “only one thing is needed,” and we need to decide what that “one thing” is for us.  Martha was “worried,” and she took it out on everyone around her.  This was not an example of joyful, overflowing, or humble service; she may have been trying to earn Jesus’s favor.  In contrast, Mary offered her eyes, ears, and implicitly, her heart.  She acknowledged that she needed to receive from Jesus, not vice-versa.  And this would not lead to passivity; surely, practical service would result from whatever she heard and received from that encounter.

Noticing a pattern, here?  As people encounter Jesus, they are distinguished by each other not by their religiosity, culture, or good works, but by their faith in Him.  A child of God is simply someone who believes in who Jesus is and receives what He has done for them (John 1:12).  He calls us to repent, believe, and follow Him – acknowledging our need for forgiveness,  trusting that His death and resurrection takes care of that, and committing our lives to His leadership and care.
Notice what these requirements exclude?  Outward religiosity, cultural background, impressive works…get the idea?  No wonder He was so polarizing.

Take a look at the rest of Luke, 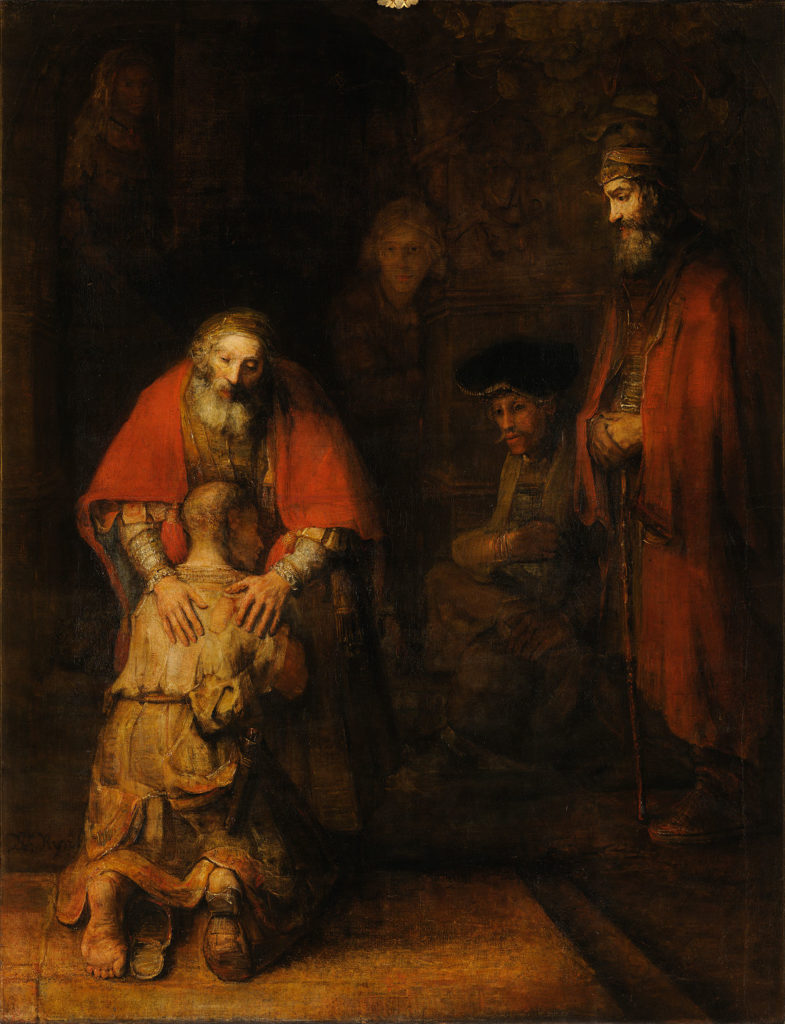 and notice also how, in Jesus’s parables, people are divided into two groups.  At God’s great banquet, there will be those who respond to the invitation, and those who don’t (Luke 14:15-24).  There are those like the Prodigal Son, who repent and return to the Father, and those like the older brother, who judge others and stay out of the celebration (Luke 15:11-32).  There are boasters who will be humbled, and the humble who will be exalted as righteous (Luke 18:9-14).  There are those who leave everything and enter the kingdom like humble children, and those who hang onto their wealth (Luke 18:15-30).

As Jesus’s birth drew near, a priest was muted for lack of faith, while a young virgin was commended for hers (Luke 1:1-38).  As Jesus’s death drew near, one disciple betrayed Jesus and met his demise; another denied Him, regretted it, and was reinstated (Luke 22:47-62).  One ruler acknowledged the innocence of the King of the Jews, and the other mocked Him (Luke 23:1-38).  One criminal on a cross beside Him joined in the mockery, while the other repented, believed, and was saved (Luke 23:39-43).  The final chapter tells of His resurrection when, finally, two people are together and agree!  Jesus encounters two men on the road to Emmaus, and reveals to them that His life, death, and resurrection have fulfilled what the Scriptures promised.  Before long, His followers will be given the Holy Spirit and sent to the world with this good news! (Luke 24:13-49) 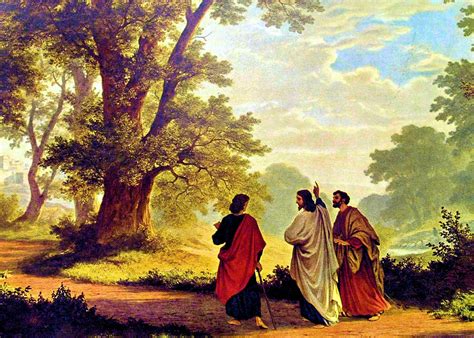 Who do you relate to, in these encounters with Jesus?
How do you respond to Him?  Who is He?  What does He mean to you?